A full black tank is a poopy situation but it's even worse when you can't find a dump station. Knowing where to dump your tanks is half the battle and the Sani Dump Station Guide will help you find them. Find out more about this complete guide to "Know Where to Dump When RVs have to go..."

We weren’t setting any speed records getting ourselves on the road this morning but we eventually picked up our stabilizers, packed up our leveling blocks and headed for Baker City, a 40 mile drive down the highway. We skipped our usual caffeine infusion as we were honed in on some WiFi at a cafe in town. The cafe was incredibly busy with the three girls running laps around the espresso bar but we eventually got our much needed fix and posted our goodies to the web. We continued up the highway till our bellies started to grumble and hit a rest stop along the interstate to whip up some munchies for a picnic lunch in the shade. 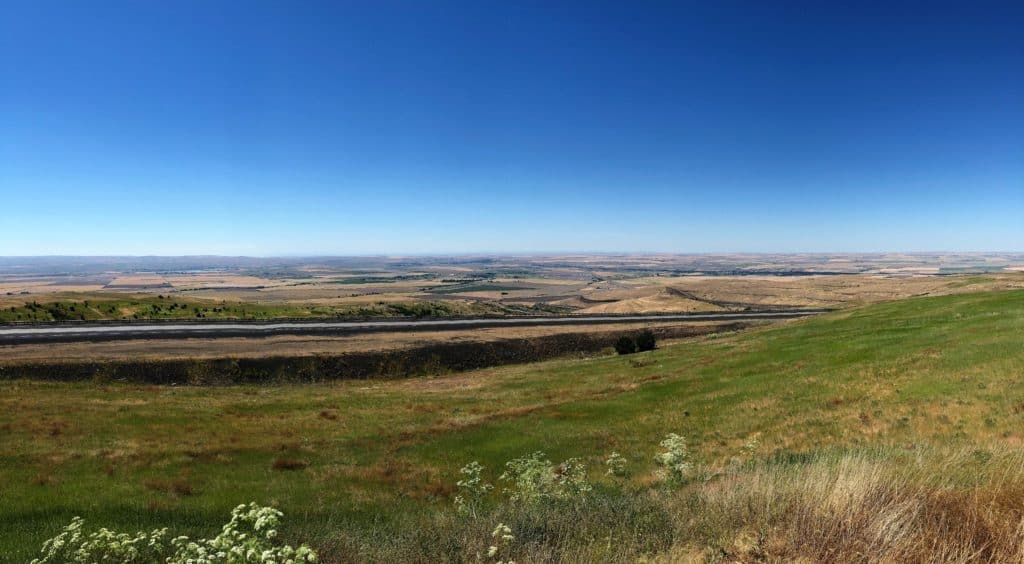 The landscapes of Oregon varied impressively along the two hour drive to Plymouth, WA. Starting as arid, scrub covered hills, climbing to a pine carpeted forest pass and finally falling to a desert brown sandbox checkered with pie shaped crop fields. It was an intriguing drive that put our thermometers to test as the day wore on. By late afternoon we had crossed the mighty Columbia River into Washington State and pulled into Plymouth Park for the rest of the day. It was blistering hot and we pulled the awning out for shade and cranked the AC in the rig.

There was a beach across a small inlet, an easy cycle distance away, so we packed a small bag and headed for a dip. The beach left something to be desired as it was in a slow moving inlet and the water was fairly stagnate. Not to be out done by the kids playing in the water we waded in slowly before taking a plunge then evacuated the site as quickly as we’d arrived. As we set out on our return, a rocky path to a point caught our eye and we proceeded to rumble down it. Our bumpy ride was rewarded with a rocky outcropping perfect for dipping our toes in the mighty Columbia River. The thirst for shade was calling us home so we cycled the slow road home to dry out from the adventure. Tomorrow’s plan was straight north with a friendly meet up on route.

It was looking to be another beautiful, hot sunny day but with plans to meet up with some friends and former colleagues for dinner we had to hot foot it out of town to keep to our timeline. We cruised the 30 miles from Plymouth to Tri-Cities where it was perfect timing to stop for lunch and a few other have to dos. Our stereo had mysteriously stopped working for us but that might be what you get for $25 on Amazon. We popped into a Best Buy and picked up a new deck which will hopefully last us longer than the old one. We moseyed down the road a few clicks to Two Rivers Park for lunch. We had specifically selected this park since it is where the Snake River meets the Columbia River. After miles of doggedly following the Snake River through 4 states it was finally time to say good bye. Monty even got a chance to bid her adieu as well.

Having eaten our fill, walked the cat, and waved good bye to the Snake River we continued up the highway for 80 miles to the town of Moses Lake. We met up with two friends for dinner and enjoyed an evening of catching up, swapping stories and mowing down some excellent food. With the sun quickly setting we said our good byes and headed out of town where we found a roadside and lakeside pull out for a free campsite along the Coulee Corridor.

The early morning Monty wake up occurred again but Beau was blessed with an incredible sunrise for his restraint from strangling the cat. With the Canadian boarder on the horizon we set out that morning with visions of hot showers and laundry as we were not far from Diane’s parents home and our final destination on this cross country adventure. We have driven this road once before but it was in mid winter and it was interesting to take in the scenery as we passed Coulee City and Chief Joseph Dam. We made a quick pit stop in downtown Oroville to pick up a couple packages from a drop shipping point and gave Monty an opportunity to make an escape out the passenger window. Fortunately he only hid under the RV as we were stopped on the main drag in town! Up the road a short ways found us making lunch at a state park on Osoyoos Lake, a lake which spans the Canadian and American boarder. We took a little walk along the water front sticking our toes in and looking longingly at the people swimming. Unfortunately our stop was cut short by some aggressive birds running kamakazie missions at the cat.

The boarder was fortunately a non-event and our anxiety was totally unwarranted. We were concerned as we needed to export the RV from the US so we could import and plate it in Canada. We nabbed some duty free goodies and left America behind us in a cloud of diesel fumes and fond memories. The drive through the Okanagan Valley from the boarder to West Kelowna was relatively easy though surprisingly long. It was an incredibly beautiful drive through wine and fruit country with multiple road side fruit stands along the way. Cherry season was in full bloom and after the flying past the first dozen signs we caved to temptation and stopped in for a few pounds for the road! As difficult as it was, Beau kept his eyes on the winding, hilly road and not on the beautiful scenery, hills and lakes. We arrived at our destination in time for a home cooked meal and a glass of some local Pinot. While this was the last stop on our cross country trek it’s just a short pause before our next adventure gets rolling!