Hey Traveller! Tired of Expensive RV Repairs? Sick of wasting your time at the Mechanic? Learn to Fix It Yourself from a Certified RV Mechanic! Check out the Fix It Yourself RV Repair Course

A brewery tour had been brewing on my mind for months and this beautiful autumn day gave us a perfect opportunity. We combined our two favourite leisure activities (drinking and cycling) into the ultimate Wednesday afternoon adventure. As luck would have it the city’s brew stations were clustered around a small area off the tip of downtown and we mapped our route accordingly.

Kelowna lies in the heart of the Okanagan valley and is a pristine lake side city with beaches and pathways hugging it’s winding shoreline. The large Lake Okanagan separated us from downtown where the action was brewing and beginning in West Kelowna meant we had some work ahead of us and some burning quads in our future. Perched on a hill side we began our downhill pedal towards the lake passing the acres of vineyards and west side wineries.

Dead ending at Kalamoir Park, the ride transitioned to a dirt track rollercoaster hugging the steep hillside while avoiding a slide to the lake below. A few dips and dodges into the ride a giant bald eagle caught my eye from a log below. The beast was perched over the lake on a fallen limb surveying the waters edge for a feast.

Across a few bridges and along the beach we popped out from the trail and back to the pavement. My advantage was lost as the sleek efficiency of Les on his road bike pulled away from my mountain bike’s bulky studs. Tucked in from the wind we thundered downhill toward the bridge to cross the lake.

Crossing the lake was a noisy affair as the cars screamed by while we summited in high gear. It was a sunny late morning with the sun reflecting off the calm waters below and a few fluffy clouds hovered above. The late October weather made for an ideal cycling climate well suited for shorts and a breathable long sleeve. Once we’d reached the crest of the bridge rolling down the leeward side and right hand rounding underneath was an effortless breeze.

We popped out at the beach and cruised the lakefront beat through the park on the waterfront path. The Park was barren, not surprising for a mid week morning, leaving plenty of freedom to roll at our leisure.

A Wrench in the Spokes

Though we’d mapped the locations, we failed to check the opening hours of our targeted tastings. Unexpectedly we rolled up to the first victim on our brewery tour but found ourselves standing dry on the stoop. Apparently Wednesday morning beer guzzling isn’t the norm in this town. Our only option was to doubled back to Urban Distillery to kill some time is style.

Urban Distillery, a few pedals away, was pouring out tune as we arrived with a panting thirst on. The tasting bar was occupied on our arrival so we opportunistically snuck back to the stills to get a peek at the process. The stainless boilers were bubbling with a clear raw liquor while the copper still sat waiting for some action. The tasting room was stacked with warming oak barrels and the walls were lined by endless shelves of fruit infused liqueurs, fancy flavoured vodkas, whiskeys, mixes and honey based meads.

We parked ourselves bar side once the party died down and ventured into a flight of Urban flare. The friendly barista got straight to business warming us up with a morning approved Spirit Bear Espresso vodka, drowning the guilt of our pre-noon indulgence. The endangered Spirit Bear (a pure white black bear) had a powerful influence on the establishment centring it’s mission on protecting the marvel of nature though donations from their profits.

Out of pure intrigue I sampled some dill pickle vodka, however, in the excitement I neglected to wait for the Clamato mixer and had a light shock of regret. Moving to their single malt whiskey and flagship Urban Burban was a warming adventure, both smooth with a light oaky finish.

Grinning with pleasure we continued to the fruit infused liqueurs, sampling the peach and the black currant varietals. They were expectedly sweet but not over the top making them a perfect addition to an afternoon cocktail or naughty dessert. Capping off the hour were a duo of honey mead wines, one oak’d and one not both acting as the perfect dessert. It was clear that escape was now or never as the tastings began to creep up on us, we fled for the exit before it was too late.

Rolling out the door and back onto the street we made a bee line for a barley stop at Tree Brewing Beer Institute. The tasting room sat just a few steps from the waterfront and a perfectly placed patio for a pint in the sunshine was just what the fall afternoon required.

The tank to tap options sat staring us down causing a pause in decision before making the Raspberry Porter my savoury selection. Les chose a pint of Pedal Head Pale Ale, a fitting pick for a brewery tour cycling adventure.

The tasting room was styled in a brewing motif of keg stand tables with live edge tops and stainless fermentation tanks back dropping the room. It would have been easy to uproot our plans and stay a while to indulge in a handcrafted spent grain pizza or pretzel but we stayed true to our brewery tour mission.

Floating into the Nest

From Tree to Nest, stop three peddled us to Red Bird Brewing arriving a few minutes to open. Once again we were welcomed to a selection of taps, requiring a few tastes to make an educated choice. The Captain Kolsch, Paramount Porter and The Tomb Stout were major competitors but the Sawmill Saison won out in the end.

The patio entrance was conveniently positioned by the Surf Side Taco food truck but unfortunately for these Wednesday wanderers we were winter hour’d out of luck. We caught the last rays of sun on the east side patio then mounted the cycles to continue the brewery tour.

One for the Road

Deep into the drinks and hankering for some chow we drifted over to our last stop on tap, Craft Beer Market. Not a brewery itself however they pipe in pints from across the globe. I settled in to a Granville Island Hefeweizen, my favourite german styled gem while my counterpart crashed back a Mt. Begbie Cream Ale. We powered down some felafel’s and hummus while grading our buzz and the road work awaiting the journey back home. 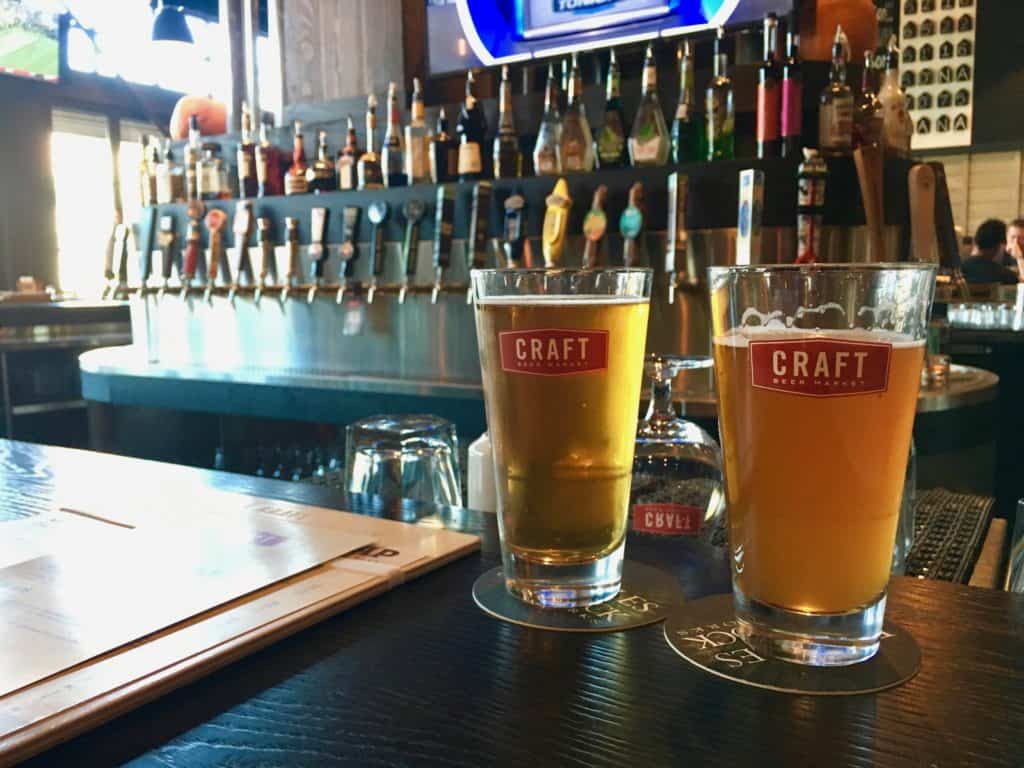 Retracing our tracks through the lakefront park and over the bridge we returned back to the west side of the lake. Our cushy downhill morning became a high gear hill climb as we pumped the pedals up to Kalamoir Park.

We spun our rubber past the beach and up the gravel path under the golden autumn foliage. The hillside cast a shadow on our trail as the sun sank lower on the horizon and the temps began to fall. 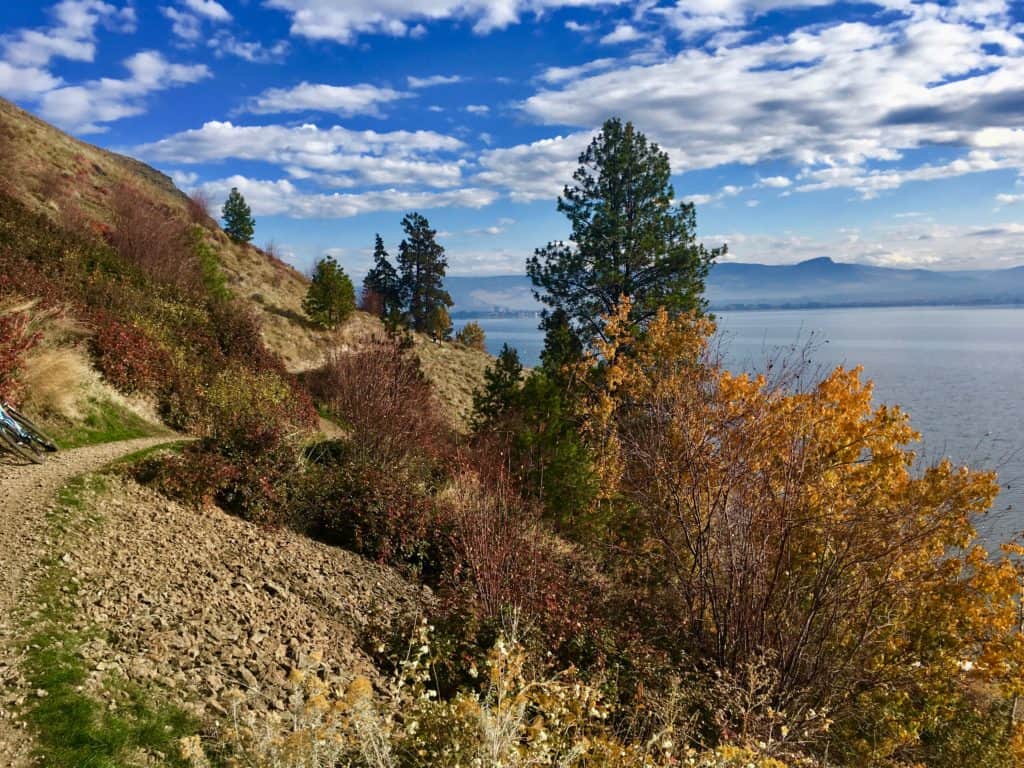 A momentary stall on a slippery slope tumbled me in a slo-mo barrel roll leaving my buttocks bruised and my ego battered. After some dusting off and a moment of laughter, we resumed the final leg pushing hard past the grape vines up the roadway to the finish.

It was a hard day of play both on the pedals and the pints. Totalling 35km cycled, 415m climbed, 4 pints finished, 3ozs sampled and 1 unexpected wipeout.

Not bad for a Wednesday grind. 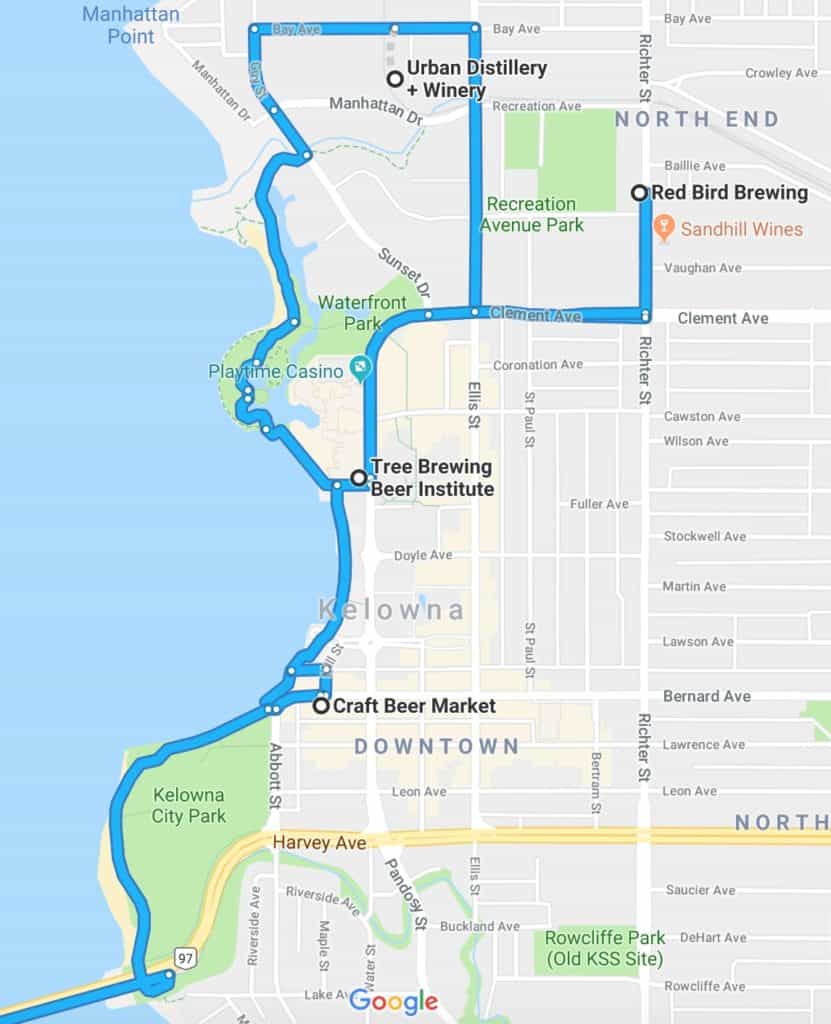 When I was pregnant with my first daughter I wondered how to fit a high chair into our 25ft RV. Not only that how would it work at campsites and on picnic tables. Then I was given a Summer Infant...

Storing your RV’s battery over the winter is a great way to increase its lifespan. There are several systems in your RV that run constantly and will drain your battery, and even worse - your...

This site is a participant in the Amazon Services LLC Associates Program, an affiliate advertising program designed to provide a means for sites to earn advertising fees by advertising and linking to Amazon.com. We are compensated for referring traffic and business to Amazon and other companies linked to on this site.