When going for RV adventures, we often explore off of the main roads and highways. These exciting locations leave us exposed to difficulties finding help in case of an emergency. This doesn’t mean mortal danger, but there are still minor accidents that can require external assistance.

Electric flares are the only type of roadside or handheld flare that can be recharged. To recharge an electric/electronic flare you need to plug it into a USB port, 12v or AC wall adaptor. Some electronic LED flares have removable batteries like AAA’s that can be replaced after being depleted.

Flares are a good way to call for help, especially if you’re RV camping in a national park or boondocking in another remote location where your cellphone is not much help. In this post, I’ll go over everything you need to know about flares and how to recharge a flare if it’s possible.

Why Should I Have Flares In My RV?

Flares are basically designed to get attention. You need to have flares stored in your vehicle in case of emergencies.

Imagine your camper getting stuck out in the woods with poor reception, how do you intend to get help? Flares come in handy in situations like this, and they disclose your position to potential rescue parties.

You can also use electric flares to alert vehicles coming from behind about potential danger ahead. If your RV breaks down by the road, using an electric flare to alert other drivers about the position of your vehicle will warn them to move into a different lane and slow down.

I advise you to have more than one flare stored in your camper because you never know what type of situation you’ll find yourself in. Many road emergency kits come with flares for you to place on the road in case of an emergency, high visibility LED flares can also be purchased separately to add to your existing kit. 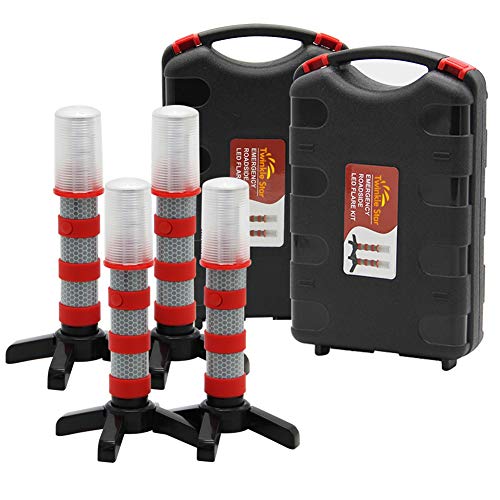 What Is a Flare?

Traditional flares are described as pyrotechnics. They can emit light, heat, or smoke without causing a dangerous explosion. However, flares are not limited to only these traditional forms. There are more advanced iterations that don’t produce any form of naked light or heat.

I want to show you the different flares that you can take along with you in your camper.

How Do Flares Work?

If you’ve seen a flare before, you’ll notice that they have cylindrical barrels with an ignitable end. When you ignite them, they start burning and produce colored light. Most times, the light is orange or red, but there are other colors.

The airtight cylinder contains different combustible chemicals. The chemical composition is not the same in all flares, so some have different colors. However, some components are common to all of them: strontium nitrate, potassium nitrate, potassium perchlorate, charcoal, sulfur, sawdust, aluminum, and some polymeric resins. Colored flares have pyrotechnic colorants, which determine the color of the flares.

Aside from the common pyrotechnic flares that you might be familiar with, there are some other non-pyrotechnic variants, and we’ll look at them before the end of this post.

How to Recharge a Flare

Recharging a flare depends on the type of flare you are using.

If you are using a handled flare like a signal flare, it is not possible to recharge it. Instead, you can manage the flare by killing it and reigniting it at intervals. If you’re using a smoke flare, there is no possible way of killing it once you’ve ignited it.

For rocket-type flares, you also can’t recharge them, and the best thing to do is to have more than one.

The only way to recharge flare guns is to have more than one cartridge. You can easily reload it like a normal gun.

Electric flares are often called electronic visual distress signals, and they refer to non-pyrotechnic flares. The majority of electric flares are made using super bright LEDs and can operate in different modes including strobe and solid lights.

Electric flares are a new form, and they are relatively safer than the other forms we’ve discussed. They don’t pose a fire risk when used in dry areas and they don’t create heat that will burn you or smoke that could irritate your eyes and lungs.

Electric flares come in different forms including round LED pucks and traditional cylindrical shapes. Their battery capacity varies depending on the number of diodes and brightness of the units and they are available in both rechargeable and replaceable versions.

Handheld flares are the type that you hold and ignite in your hand. They are among the most used flares. However, not all flares classified as handhelds have to be held in your hands after ignition.

The signal flare is a type of handheld flare, and it is the most common type. You can light a handheld flare with a lighter or match stick.

Once the flare ignites, it starts giving off a strong, intense light, often red. The red color is very distinctive, and it can be seen from a long distance, especially at night. You can also use the signal flares during the day — the red light is very strong and burns intensely.

You need to be careful when using this handheld flare because it tends to generate a high amount of heat due to the rapid combustion of the chemicals in the cylinder. The flares can burn for a short or long time, from 30 seconds to minutes, and the duration depends on the type and brand you buy.

Smoke flares are also classified as handheld, but they are quite different from signal flares. When you ignite a smoke flare, it gives off a strong-colored smoke that can be seen over a long distance.

You don’t have to hold on to a smoke flare after you’ve ignited it, and I don’t even advise you to hold it. Instead, ignite the smoke flare and toss it a reasonable distance from where you’re standing. Be sure not to stand in the line of smoke because the smoke can irritate your eyes and nose.

Another thing to note is that smoke flares differ from signal flares, in that they lack light emission. Light emission is not the same as color. Smoke signals have color but no light, while signal flares have both color and light.

Due to the absence of light emission, it will be difficult to spot a smoke signal at night. However, smoke signals are very effective during the day.

When you’re going camping, I advise that you take both smoke and signal flares. It is better to be prepared since you don’t know what time of the day an emergency can arise.

Rocket flares are the type of flares launched into the air before they ignite, giving their signals high above sea level. There are two main types of rocket flares: the self propelled rocket flares and the flare gun.

There are different designs for rocket flares. Some flares have strings attached to the end, and when you pull the string, the initial ignition is triggered.

Another design is the impact base flare. The rocket flare base is rigged with an explosive percussion cap. When this cap is hit with considerable force, an explosive effect is triggered, and the flare is fired up.

Flare guns also fit under the description of rocket flares because they fire the flares into the air that explode to emit colored light. The flares used in flare guns are specially designed aluminum cylinders, and they are similar to the rounds of a shotgun.

Flares fired from this gun can go as high as 300m. Also, after the rounds explode, they are rigged with small parachutes that keep them suspended for some time. The parachute increases the time your flares remain visible and increases the chances of someone spotting your call for help.

The flare gun is similar to a regular pistol. Let’s look at how some of the parts compare:

The trigger is very much like that of a regular gun, and it is the part you pull to fire the gun. The trigger is connected to the hammer.

The hammer is connected to the pin. The hammer takes the force generated from pulling the trigger, amplifies that force, and then sends it to the pin.

The pin comes in contact with the flare and triggers the explosion that sends it into the sky.

The barrel of the flare gun is larger than that of a regular handgun. The huge flare barrel has a wider diameter than regular rounds.

It is better to always carry flares with you when setting on your mobile camper, and you never know when you will need assistance.

It’s important to know about the different types of flares and how they operate. The electric flare is still the best bet for long-term use, and now you know how to recharge a flare too.

Learn more about maintaining your RV and other helpful tips for your mobile home. 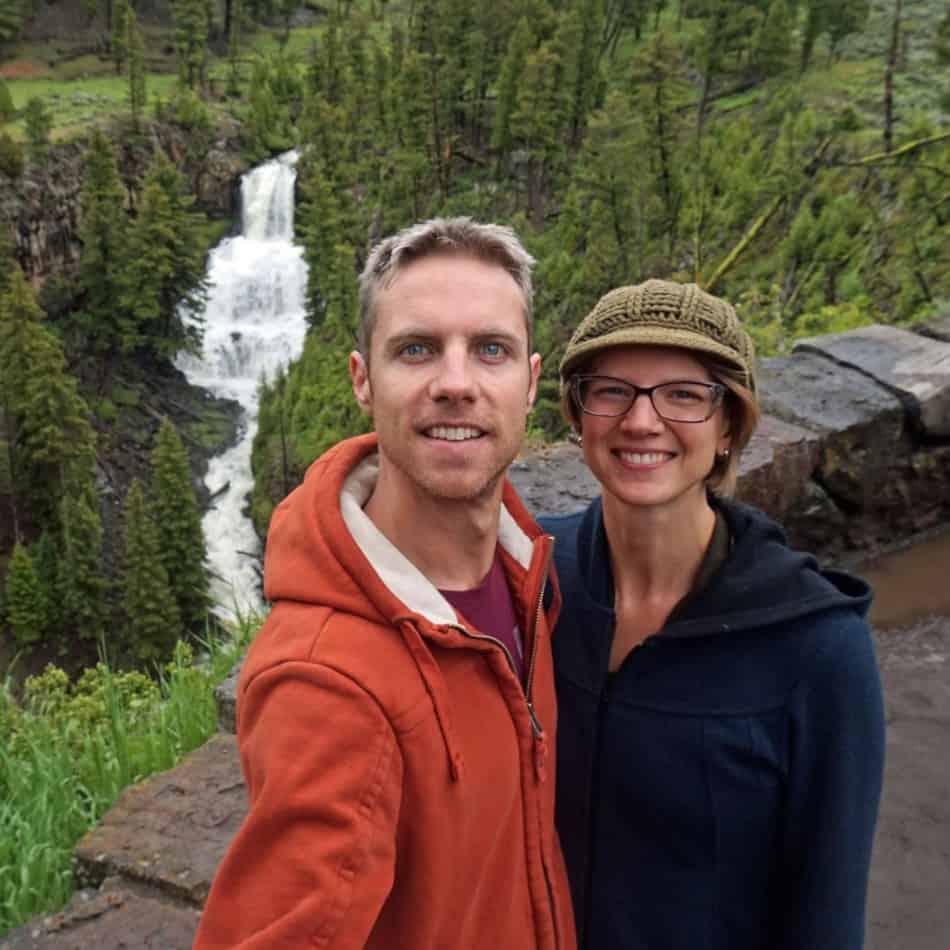