A full black tank is a poopy situation but it's even worse when you can't find a dump station. Knowing where to dump your tanks is half the battle and the Sani Dump Station Guide will help you find them. Find out more about this complete guide to "Know Where to Dump When RVs have to go..."

A hot tip from our lone neighbor at a beautiful, free campsite near Craters of the Moon National Park had us setting out for Shoshone Falls in Twin Falls, Idaho. A minor detour on our way to Boise. It was a beautiful blue sky day with the picturesque puffy clouds hovering above the mountain tops and scrub brush as far as the eye could see.

Arriving at Twin Falls we were astonished by the massive canyon the highway crossed and the vertigo inducing distance to the river below. We navigated our way through town with the GPS taking us on “the shortest” route which never seems to be the RV friendly route. It was a narrow winding road from the top of the canyon to the parking lot. The view was impressive as we pulled in to Shoshone Falls park, once again the Snake River amazed us. We couldn’t help but admire the sheer power of the water as it careened off the edge of the cliff, crashing into the river below. There were several look outs allowing you to be nearly above the falls for some premium photo ops. Just down river from the falls is the spot that Evil Knievel attempted to jump the Snake River.  He apparently did not succeed; not something that sounds appealing at all! The falls are 212 feet high and 950 feet wide and are fondly known as “the Niagara of the West”. The land surrounding the falls was generously donated in 1932 to the city to ensure it would be “forever held for park purposes only for the beneficial use and enjoyment of all the people”

Having filled our phones, camera, and drone with photos and video we headed up the highway towards Hagerman fossil beds. We have been chasing passport stamps from national park to national monument. Much to our dismay the monument available to tourists was nothing more than a tourist information center. The fossil beds themselves are on the bluffs above the river and still under archaeological excavation. We watched a short video which was a bit cheesy but have the stamp to prove we’ve been there.

From there, a free campsite was only 8 km away, so we headed that direction hoping for an improvement from our last stop. To our complete surprise the site was directly on the Snake River, complete with a boat launch and dock. We have been following the Snake River on and off for days since leaving the Tetons. Being one of the earliest stops we’ve made for sometime, the sun was shining down from the blue sky above the cliffs across the river. Making the most of our pristine summer day, we broke out our chairs and lounged on the dock soaking up the rays. We even took a quick dip in the river to cool down. 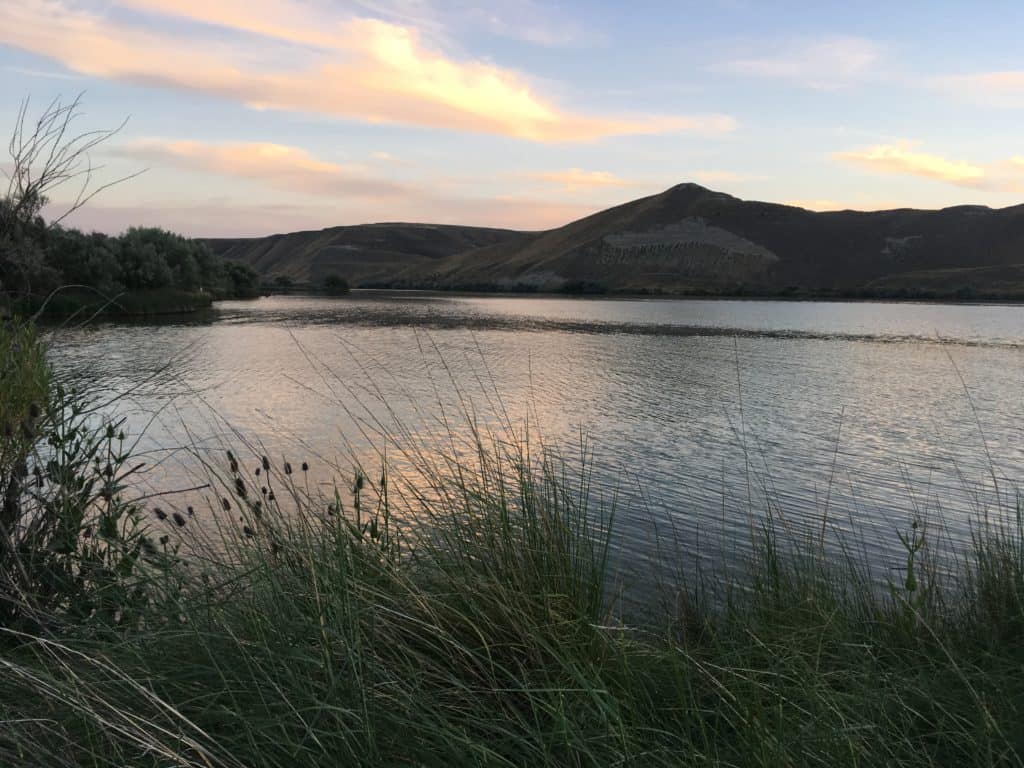 The next morning saw the winds kick up in the early hours prior to dawn rocking the RV to and fro and waking us up from our peaceful slumber. We clung to our elevated bed as Izzy shuddered in the gusts and the air howled through the roof vents. Needless to say we hit the road early and headed up the I-84 to Boise, about 85 miles away.

Upon pulling in to the city we headed straight to Anne Morrison Park, a sprawling park along the river near the downtown core. We nabbed the first two parking spots we found and unloaded the bikes. Being a Saturday, it was perfect timing to have landed in one of the few major cities we’ve visited on our trip. In fact, we were only a 9 minute cycle to the downtown weekend street market. The park path led us along the river, across an old rail bridge and directly to a biking street spilling us out into the market. We hitched our rides to a nearby post among the chaos of other parked cycles and headed into the market. There were several blocks of stalls, a mix of coffee roasters, food stalls, fruits and veggie stalls, farm fresh meats and artisans selling jewelry, art, and clothing. Perusing most of the options we did opt to grab some much needed ground coffee from a local roaster (we chatted for a bit and got to try some samples), a few pints of fresh blueberries and raspberries from a farmers stand and munched on some Sambusas and Pad Thai for lunch.

As the market wrapped up, we browsed Freak Alley Gallery, a graffiti lined alleyway behind the market street full of color and artsy images. We boarded our bikes, now filled and feeling adventurous, and headed back towards the park choosing a new section of path for a round about return. The river was flowing at a leisurely pace and people were riding the current down stream on inflatables. It appeared to be a popular past time as the trail was littered with floaters along the waters edge inflating and deflating their crafts. It was clear that the park traffic had picked up on our return, and that Izzy’s two spots had become prime real estate for afternoon parkies. Their eyes were upon her plot as they slowly coasted by while we mounted the bikes, boarded our beast and crawled our way out of there.

We ramped back onto the highway toward the Oregon border. The highway had gained height as we hazard-ed up the hills and maxed our land speed down. Similar to our entry to Idaho, our exit was unexpectedly vertical. The hills were lumpy and carpeted brown with scrub and shadow mixed in. Our first taste of Oregon was decidedly mute yet the sun and the river we’d come to expect was keeping us company still. Riding the border of state and time we settled down along the Snake River with Idaho in view and pacific time in reach.

Check out the video of Shoshone Falls and Boise! Subscribe to our YouTube channel so you don’t miss a single minute!